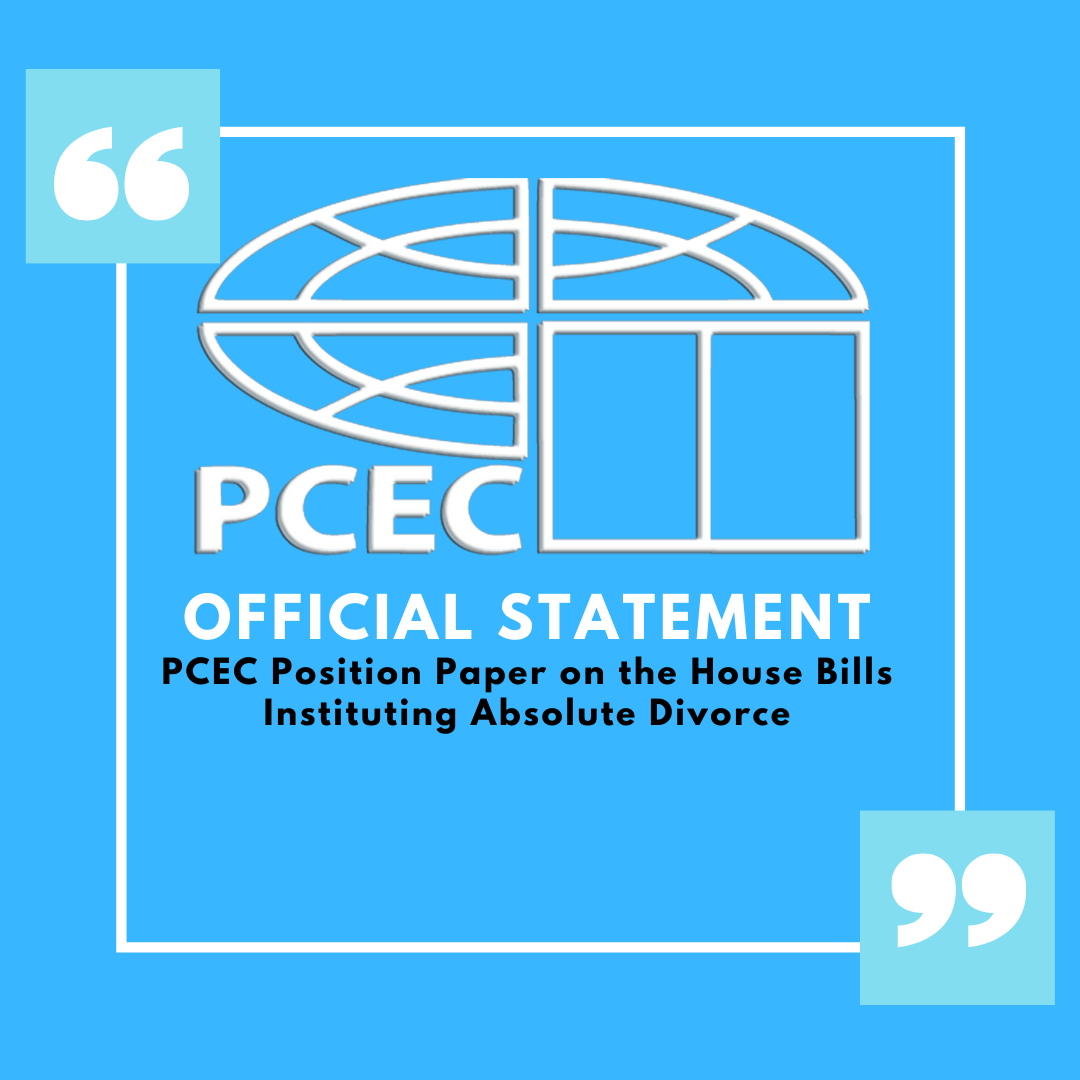 For Submission and Presentation to

the Committee on Population and Family Relations February 12, 2020 at Ramon V. Mitra Bldg.

PCEC appreciates the invitation of the House Committee on Population and Family Relations to take part in the meeting of the Technical Working Group (TWG) on February 5, 2020 to deliberate on Bill nos. 100, 838, and 2263. We would like to thank the Committee, headed by Hon. Ma. Lucille L. Nava, M.D., and Hon. Edcel C. Lagman, Chairman of the TWG, for this privilege. It is our prayer that our position as Evangelical Christians, based on our biblical conviction, will be able to assist our honorable legislators in the crafting of a very important legislation in a way that will redound to the glory of God and for the lasting benefit of the families of our beloved Philippine nation.

Our Proposal: Expand the Grounds for the Annulment of Marriage

We propose expanding the grounds for annulment instead of having a law on divorce.

The principle behind annulment emphasizes the permanence and sanctity of marriage, which is in accord with the Biblical mandate. On the other hand, notwithstanding the history of divorce in

our country, public perception of divorce has come down to us primarily through the lenses of Western culture, which emphasize the anti-Biblical view that marriage is impermanent and easily desecrated.

Our Theological Bases and Stand

We, the Philippine Council of Evangelical Churches, followers of our Lord and Savior, Jesus Christ, uphold the teachings of Jesus and the Holy Scripture that marriage is sacred, that its origin is divine. As a crucial part of the ordinances laid down by God in creation (Gen. 2:21-24), the biblical conception of marriage encompasses every person. Indeed, having its foundation in God, marriage goes beyond being a mere cultural invention, social construction, or product of legal legislation. As such, it is ultimately God’s purposes for marriage that must carry the day, one of which purposes is to unite man and woman into a lifelong covenant communion as “one flesh” (Gen. 2:24; Matt. 19:5-6). Along with marital faithfulness, permanence is a biblical norm for marriage (Mk. 10:9).

Scripture, nonetheless, recognizes few, painful, exceptions to the general rule, when the marriage bond may be dissolved (Matt. 19:9; 1 Cor. 7:15) due to spousal abuse, betrayal, or neglect. Such permission granted by Scripture should not be viewed as being tantamount to a command. Divorce is never obligatory. As Jesus said, the permission to divorce was only granted due to humanity’s “hardness of heart” (Matt. 19:8). Thus, God’s purpose for marriage is

reflected more in marital reconciliation, in the restoration of a broken-down marriage, even due to the gravest of reasons (Hos. 3:1-3; 1 Cor. 7: 12-14 ), than in the absolute dissolution of a valid marriage.

Therefore, as Evangelical Christian citizens of our nation, PCEC supports:

•           The expansion of the grounds for annulment, since the principle behind annulment conforms to the Biblical principle emphasizing the very restricted grounds for the dissolution of marriage. On the other hand, the perception of divorce in our country is due to the Western influence, which has emphasized the secular and impermanent aspects of marriage.

We further hold theologically and pastorally:

•           God instituted marriage to be permanent. It is also an aspect of discipleship that reflect

God’s unbroken faithfulness to his people.

•           Divorce is contrary to God’s will. This is the general rule to which there are few exceptions. The exceptions demonstrate general principles that can be applied to similar marital situations.

•           Remarriage after a dissolution of marriage on valid grounds is allowed in Scripture. The innocent party is free to remarry without committing sin.

Critique of Specific Provisions of the Divorce Bills

A.  On the Grounds

As mentioned above, Scripture recognizes few reasons that allow for the dissolution of marriage. Two are specifically mentioned: marital unfaithfulness (porneia) as stated in Matt.

19; and permanent desertion as mentioned in 1 Cor. 7. The biblical teachings on these exceptions are to be taken as general moral principles, not as legal standards, which as mentioned above, can be applied to similar instances. Critical here is the commitment by one of the spouses of an act that Scripture considered a valid ground to dissolve the marriage. Outside of such validly held grounds, one or both of the spouses commit the sin of “adultery” in remarriage.

This means to say that biblical divorce does not condone a “no-fault” divorce. There must be a very grave action committed by an erring spouse for the marriage bond to be validly dissolved. Jesus therefore condemned divorce based on an understanding of the Mosaic Law notion of erwat dabar (“something indecent,” Deut. 24:1), which dissolved marriages for any and whatever cause.

1.   PCEC therefore rejects strongly a “no-fault” divorce, which will only erode the moral foundation of marriage. We object to Sec. 5 (f) of HB nos. 100, 838, and 2263 that propose as a reason for divorce the blanket ground of “irreconcilable marital differences,” which encompasses any reason that does not allege fault.

2.   On the other grounds for divorce mentioned in the House Bills, PCEC agrees with the following, with our suggested additions written in red texts and our suggested deletions underlined.

b. Serious Physical violence or grave moral pressure to compel the petitioner to change religious or political affiliation (HB 100, 838, and 2263, Sec. 5.a.2.).

c. Attempt of respondent to corrupt or induce the petitioner, a common child, or a child of the petitioner, to engage in prostitution, or connivance in such corruption or inducement (HB 100, 838, and 2263, Sec. 5.a.3.).

Actual imprisonment must take place, and not only the pronouncement of the sentence. We view five years of actual confinement important since the possibility of being released for a shorter period exists, which could lead to the restoration of the marriage bond.

The duration of the abuse must be demonstrated to gauge its severity. We suggest a period of at least one year of habitual, not necessarily daily, substance use and chronic gambling.

Without any suggested modifications, we affirm the following grounds from HB 100,

f.    Homosexuality or bisexuality of the respondent (a.6.)

g.   Contracting by the respondent of a subsequent bigamous marriage, whether in the

Philippines or abroad (a.7.)

h.   Marital infidelity or perversion or having a child with another person other than one’s spouse during the marriage, except when upon the mutual agreement of the spouses, a child is born to them by in vitro or similar procedure or when the wife bears a child after being a victim of rape (a.8.).

j. Abandonment of petitioner by respondent without justifiable cause for more than one year (a.10).

Again, without any modifications, we affirm the following grounds for divorce, which are some the grounds for the annulment of marriage found in Article 45 of the Family Code and restated in Sec. 5.b. of the House Bills:

k.   The party in whose behalf it is sought to have the marriage annulled was eighteen (18) years of age or over but below twenty-one (21), and the marriage was solemnized without the consent of the parents, guardian or person having substitute parental authority over the party, in that order, unless after attaining the age of twenty-one (21), such party freely cohabited with the other and both lived together as husband and wife;

l. Either party was of unsound mind, unless such party after coming to reason, freely cohabited with the other as husband and wife;

m.  The consent of either party was obtained by fraud, unless such party afterwards, with full knowledge of the facts constituting the fraud, freely cohabited with the other as husband and wife;

n.   The consent of either party was obtained by force, intimidation or undue influence, unless the same having disappeared or ceased, such party thereafter freely cohabited with the other as husband and wife;

o. Either party was physically incapable of consummating the marriage with the other, and such incapacity continues or appears to be incurable;

p.   Either party was afflicted with a sexually transmissible infection found to be serious or appears to be incurable:

q.   When the spouses have been separated in fact for at least five (5) years at the time the petition for absolute divorce is filed, and reconciliation is highly improbable. The Court will determine who is the innocent and offending spouse (HB 100, 838, and 2263, Sec. 5.c.)

stemmed from one of the spouse’s intentions and overt actions.

r. Psychological incapacity of either spouse as provided for in Article 36 of the Family Code of the Philippines, whether or not the incapacity was present at the time of the celebration of the marriage or later (HB 100, 838, and 2263, Sec. 5.d.).

s. When one of the spouses undergoes a gender reassignment surgery or transitions from one sex to another, the other spouse is entitled to petition for absolute divorce with the transgender or transsexual as respondent, or vice versa (HB 100,

B.  On the Procedure for Obtaining Divorce

See above critique under no. “1.” on irreconcilable differences.

Except for grounds under summary judicial proceedings, the proper court shall not start the trial of a petition for absolute divorce before the expiration of a six-month one-year cooling- off period after the filing of the petition during which the court shall exercise all efforts to reunite and reconcile the parties

The requirement of a cooling off period shall not apply in cases which involve acts of violence against women and their children under Republic Act No. 9262 otherwise known as the “Anti-Violence Against Women and Their Children Act of 2004” or attempt against the life of the other spouse or a common child or a child of the petitioner (HB 100, 838, and 2263, Sec. 9).

For grounds not involving violence against women and children, and other dangers posed by the use of drugs and alcohol, we propose a longer cooling-off period of one-year, during which time the spouses are to receive, together and individually, legal mediation, psychological assistance, religious counseling, and the like. Six months is not adequate in exhausting available means that could help restore the marriage.

1.   The conjugal partnership of gains or the absolute community shall be dissolved and liquidated and the assets shall be equally divided between the spouses dissolved and liquidated excluding the paraphernal or exclusive properties of either spouse, but the offending spouse shall have no right to any share of the net profits earned by the absolute community (First sentence of HB 100, 838, and 2263, Sec. 10.c.).

We ardently propose following the principle laid down in Art. 63-66 of the Family Code, which grants the innocent spouse a more favorable share in terms of the division of property, child custody decisions, etc. An unequal division of the conjugal property would demonstrate equity especially when actions of the offending spouse have led to the loss of marital assets, which often happens due to infidelity, drug abuse, and other similar reasons.

2.   The petitioner innocent spouse may revoke the donations made in favor of the respondent, as well as the designation of the latter as a beneficiary in any insurance policy, even if such designation be stipulated as irrevocable. (First sentence of HB 100 and 2263, Sec. 10.f; HB 838, Sec. 10.g.).

Because the term “petitioner” could refer to either the offending or injured spouse, we propose, following the abovementioned comment on conjugal partnership, changing the term to “innocent spouse,” who not being “at fault” must be accorded greater rights in marital property relations.