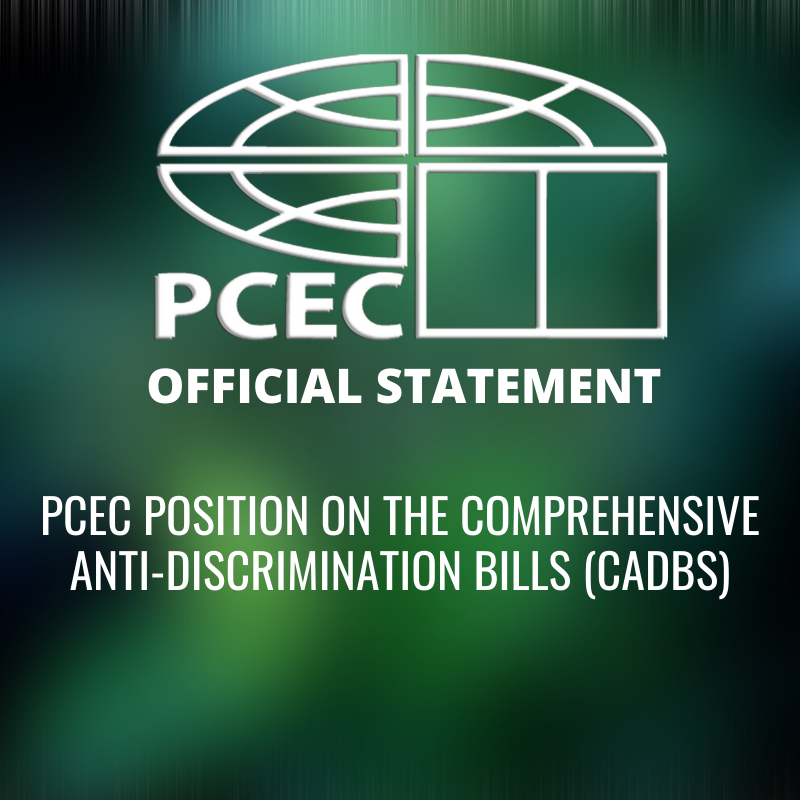 The Committee on Human Rights of the House of Representatives

We, the Philippine Council of Evangelical Churches (PCEC) highly appreciate the invitation of Rep. Jesus “Bong” Suntay, Chairperson of the Human Rights Committee, to submit our position on the Comprehensive Anti-Discrimination Bills, and participate in the initial deliberations scheduled this coming March 10, 2020 at the House of Representatives.

We support the passage of a comprehensive anti-discrimination law protecting the dignity and equality of every person in our nation in view of the various, and at times intersecting, forms of discrimination that have been plaguing many of our country’s citizens, such as, among others, discrimination on the basis of sex and gender, discrimination of the Indigenous Peoples (IPs), the Muslim Filipinos, and Persons with Disabilities (PWDs).

Certainly, discrimination and intolerance toward anyone have no place in our society, where an overwhelming majority profess to deeply worship the one God who is loving, fair, and just. In calling for the passage of a CADB, as Evangelical Christians, we also make this call that such a law should respect and adhere to a specific fundamental right enshrined in our Constitution and in international laws—the right to religious freedom.

Our Theological Basis and Stand

As disciples of our Lord Jesus Christ, whose utmost love and concern for the marginalized and the oppressed reflect the very heart of God (Matt. 25:34-36), we at PCEC seek to follow him in upholding the dignity of all human beings, especially our society’s oppressed, for every person without exception is created equally in God’s very image (Gen. 1:27). Indeed, throughout his ministry, Jesus lifted up the downtrodden and recognized the utmost worth of a person, regardless of society’s perception (Matt. 20: 29-34; Lk. 4:18). His loving solidarity with suffering humanity was even more powerfully expressed on the cross, where he gave up his life for the lost, the sinner, and the ungodly (Matt. 18:11; Lk. 19:10; Rom. 5:6-8). It is thus God’s unfathomable love for undeserving human beings which is the ultimate ground for humanity’s intrinsic worth. That is to say, human dignity is not based on something intrinsic to humanity, but upon how a person stands in relation to God who first loved her/him.

Hence, PCEC stands firmly against desecrating human dignity through any form of oppression, which is often exemplified in direct and indirect acts of exclusion or discrimination. Such acts not only devalue the human person, but they cut people off from a community’s network of interdependence and from enjoying the goods shared in the community due to their perceived inferiority based on certain grounds such as race, ethnicity, age, gender, physical disabilities, health status, religion, social class, and the like. Discrimination thus goes directly against the biblical norms of justice that calls for defending the rights of the weak, poor and oppressed (Isa. 58:6-7; Ps. 82:3-4; Jas. 1:27), and the central biblical commandment given us that just as we ought to love God above all else, we also ought to love our neighbors as ourselves (Matt. 22:37-40). This command compels us to seek the flourishing of others, which is preconditioned on seeking one’s own flourishing.

As a religious community, we are mindful of how religious affiliation, especially among religious minorities, has often led to experiences of social discrimination. We therefore support the passage of a Comprehensive Anti- Discrimination Law that enhances social equality by protecting the distinct traits inhering in various groups including religious institutions. As Evangelicals, we enjoin our legislators to ensure that the anti-discrimination measure will uphold the freedom of religion to enable religious communities in general, and Evangelicals in particular, to worship freely as a community and participate in public life in accordance with our religious convictions flowing from the Greatest Commandment–to “love the Lord your God with all your heart, with all your soul, and with all your strength” (Deut. 6:4-5; Lk. 10:27).

PCEC fully supports Article 2, Sec. 11 of the 1987 Philippine Constitution declaring that “the State values the dignity of every human person and guarantees full respect for human rights.”

We agree with generally-accepted international covenants and principles on human rights, and affirm the view of the UN Human Rights Committee that the International Covenant on Civil and Political Rights (ICCPR) regards the right to non-discrimination as an “autonomous right,” thereby discrimination is prohibited “in law or in fact in any field regulated and protected by public authorities.”

We stand by what is written in Article 3 of the 1981 Declaration on the Elimination of All Forms of Intolerance and of Discrimination Based on Religion or Belief, which states, “Discrimination between human beings on the grounds of religion or belief constitutes an affront to human dignity and a disavowal of the principles of the Charter of the United Nations, and shall be condemned as a violation of the human rights and fundamental freedoms proclaimed in the Universal Declaration of Human Rights and enunciated in detail in the International Covenants on Human Rights.”

The following form PCEC’s main proposals for the final version of the CADB. Additional proposals and remarks, if any, will be submitted for the next deliberations.

While we at PCEC support prohibiting various discriminatory acts such as the promotion of stigma, those related to work, education, access to public spaces, institutions, housing, and other similarly injurious acts, we firmly maintain that when done in accordance and faithful conformity with the beliefs and practices of a generally accepted religious tradition, such acts are NOT DISCRIMINATORY.

We believe that WITHOUT INCLUDING A RELIGIOUS EXEMPTION PROVISION in THIS ANTI-DISCRIMINATION ACT, THIS ACT WILL VIOLATE ITS OWN ETHOS. Without providing for religious exemptions, the CADB may purport to defend and protect the rights of other groups WHILE AT THE SAME TIME DISCRIMINATE AGAINST OTHERS.

Section 5. Exceptions – Notwithstanding Sec. 4 of this Act, the following Acts shall not be deemed unlawful or discriminatory, within the meaning of this Act:

PCEC believes that its Evangelical Christian convictions, as briefly outlined above, do not clash with rights-based discourse as correctly utilized in the CADBs. We believe religious beliefs and human rights are complementary in seeking to address issues of poverty, exclusion, violence, and other realities that devalue human dignity.

PCEC fully supports the incisive proposal of Cong. Ferdinand Romualdez in Art. 2 (Sec. 7?), Sec. 8 and Sec. 9 of HB 4684 in creating an Anti-Discrimination Mediation and Conciliation Commission and Board.

Similarly, we are highly supportive of a similarly incisive proposal made by Cong. Geraldine Roman in Sec. 9 of HB 136 calling for the establishment of Non-Discrimination and Equal Opportunity Committees.

We also give our support to the important proposal of Cong. Eddie Villanueva in establishing “Redress Mechanisms,” found in Sec. 8 of his HB 6024.

HOWEVER, the foregoing bills do not give any specific, much more any substantial role, for religious organizations, EXCEPT HB 4684 (Sec. 8.1.) providing for the inclusion of the National Council of Muslim Filipinos, whether in formulating rules and regulations, monitoring compliance to the Act, in the initial investigations, and in other related processes.

We Propose the Inclusion of Representatives of the Key Religious Organizations in these Overseeing Boards and Committees.

We therefore commend the forward-looking and inclusive Davao City Ordinance No. 0417-12, promulgated in 2012 by Mayor Sarah Duterte and then-Vice-Mayor and now our President Rodrigo Roa Duterte, which established a truly inclusive Anti-Discrimination Mediation and Conciliation Board (Sec. VII). Among others, the Board consists of a Representative from the Indigenous Peoples (IPs), Head of the Muslim Affairs in Davao City, and Head of the interfaith Bishops-Ulama Conference (BUC).

We propose establishing a similar anti-discrimination council, which includes representatives from key religious organizations and other sectors in order to create a more inclusive administrative body reflective of the spirit and purpose of the CADB.

Finally, we AFFIRM the PURPOSE of such an Anti-Discrimination Council, Board or Committee, as stated by Cong. Romualdez in Sec. 9.3 of HB 4684 that such a body will give priority to the mediation and conciliation of the parties involved.

Such PURPOSE is also mentioned in the aforementioned Davao City Ordinance, which we, as a religious community that places utmost emphasis on reconciliation, fully support:

Sec. IX. Main/PRINCIPAL FUNCTION OF THE ANTI-DISCRIMINATION MEDIATION AND CONCILIATION BOARD AND SUB-BOARD –

The Anti-Discrimination and Conciliation Board and Sub-Board are tasked to receive complaints concerning violations of any provision of this Ordinance, notify the parties concerned of the same, and mediate or conciliate the parties’

differences to the end that judicial, quasi-judicial, prosecutorial, and administrative action is AVOIDED.

14 May the grace of the Lord Jesus Christ, and the love of God,

and the fellowship of the Holy Spirit be with you all.

For the Philippine Council of Evangelical Churches:

Almost 10 years ago, Typhoon Yolanda took everything away from Rowelyn Animos – her house, her education, and her hope.

Almost 10 years ago, Typhoon Yolanda took everything away from Rowelyn Animos – her house, her education, and her hope. Now, she is one of our volunteers in Dulag, Leyte, who will bring the same hope to those struck by Typhoon Odette. “The Lord Jesus restored what I had lost, so I am happy that […]

“At first it was quite normal in the afternoon of Dec. 16, 2021, but later on the actual strength of Typhoon Odette was felt. Both our house and our minds were devastated. “The main problem here is the money for the repair of our houses. Based on the estimates of a local carpenter, I need […]

Typhoon Odette affected and displaced half of those struck by Typhoon Yolanda in 2013.

Typhoon Odette affected and displaced half of those struck by Typhoon Yolanda in 2013. That is, 7.8M and 2.9M respectively, compared to Yolanda’s 14.1M and 4.1M, according to United Nations Office for the Coordination of Humanitarian Affairs (UN OCHA) Philippines. Although Yolanda’s death toll rose to 6.3K, Odette has claimed 405 lives too many. However […]

Praise God for Region 8 PNP for providing police trucks to deliver 975 sets of 25kgs rice, 5 gallon water and assorted food and non-food items. The trucks will go back for the second trip to pick up 600 more sacks of rice, for distribution to Pintuyan, Southern Leyte. #OdettePH #PHILRADSInAction #ServingPeopleInJesusName